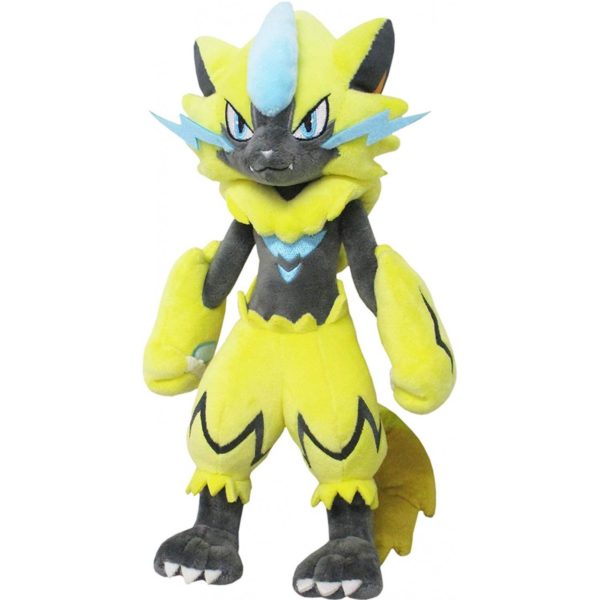 San-ei’s Pokémon All Star Collection plush series features a beautifully detailed version of Zeraora! Some of the highest quality Pokémon plush on the market come from this lineup. Every plush is constructed out of super soft ‘minky’ fabric and weighted with beans to help them sit/pose.

Zeraora is a bipedal, feline Pokémon with primarily yellow and black fur. The fur is thinner and black on its lower legs, lower body, upper arms, and face, and is thicker and yellow everywhere else. There is also a zigzagging black stripe on each thigh and two more stripes on each forearm. There are small tufts of light blue fur on its chest and a longer tuft on its forehead. It also has a single, lightning bolt-shaped blue whisker on each cheek. A long, ponytail-like or tail-like bunch of fur extends from between its shoulders. Zeraora has large ears with black insides and blue eyes. Its forepaws have four clawed fingers and light blue pads, while its hindpaws have only three clawed toes. Zeraora lacks an electricity-generating organ, so it gathers and stores electricity from outside sources. This Pokémon can create a very powerful magnetic field through the strong electric currents emitted from its paw pads. Using this magnetic field allows it to levitate and move at high speeds while airborne. It can travel as fast as a lightning strike. Its fur is known to stand on end whenever it is using massive amounts of electricity. Zeraora can tear its opponents apart with it high-voltage claws. Even if the opponent dodges, they still get electrocuted by the flying sparks. Lighting flashes and thunderclaps can occur when Zeraora starts running.