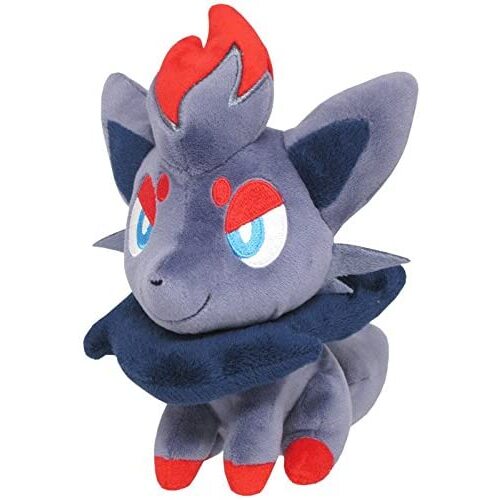 San-ei’s Pokémon All Star Collection plush series features a beautifully detailed version of Zorua! Some of the highest quality Pokémon plush on the market come from this lineup. Every plush is constructed out of super soft ‘minky’ fabric and weighted with beans to help them sit/pose.

Zorua is a slate gray, fox-like Pokémon with red and black accents. Its ears are triangular with dark insides, and it has a large tuft of fur tipped with red on top of its head. It has greenish blue eyes with red eyelids. There are circular, red markings above the eyes that resemble eyebrows. Its muzzle is short and tapered with two small fangs seen in the upper jaw when its mouth is open. Zorua possesses a ruff of black fur around its neck and four short limbs tipped with red. Its tail is short and bushy. Zorua can change its physical appearance, though this transformation is merely an illusion as it keeps its own type and moves.