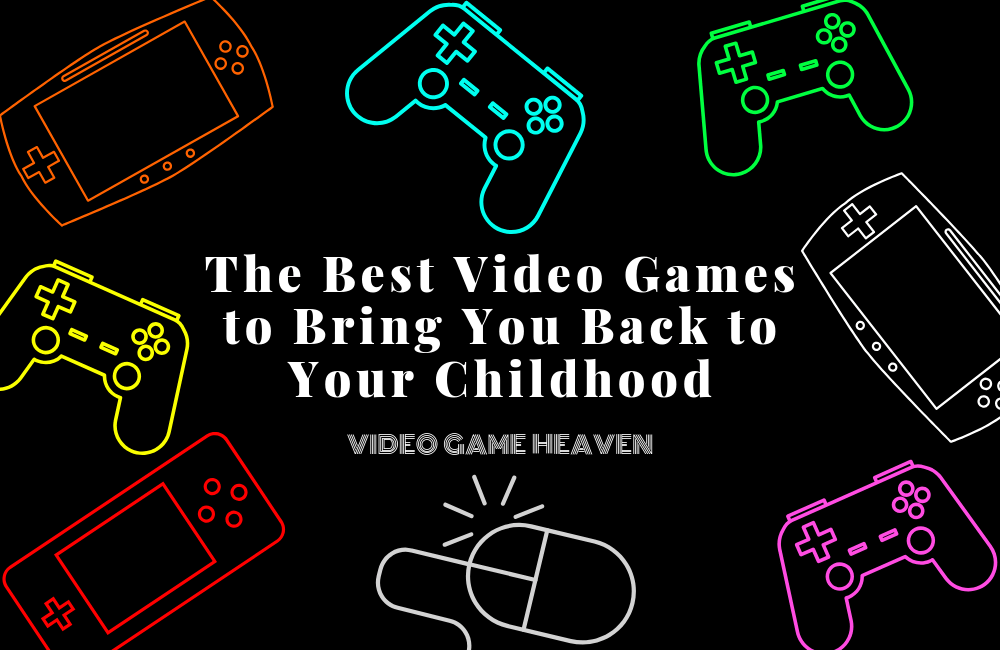 The Best Video Games to Bring You Back to Your Childhood

The Legend of Zelda

Zelda had a way of pulling you into its imaginary world and not releasing you for several days. It offered the perfect mixture of gameplay, graphics, and realistic sounds. Ocarina of Time follows the adventures of Link, a young boy on a quest to rescue Princess Zelda, leaving you to wonder why in the world the game is named after Zelda who plays a relatively miniscule role in the game. The quest leads you through dungeons, villages, volcanos, a lake, a haunted desert, magical forest, through time!

Staged on the fanciful Wumpa Islands where humans and mutant animals peacefully co-exist, Crash Bandicoot was a hoot! You played as Crash, a mutant enhanced bandicoot which, yes, is a real species but, no, doesn’t closely resemble Crash, as he smashed, jumped, and spun his way through the island to save his girlfriend from his nemesis, Doctor Neo Cortex. It was a fun but intense game. For example, I’m sure you fondly remember the level where you were chased by a giant boulder and had to dodge loads of other obstacles in order to avoid being crushed. There have been several new spin-offs like the N Sane Trilogy which was released in 2017.

Mario Kart was and always will be a classic. Because it could be played solo or with up to four players, you probably made it multi-player mayhem with some of your closest friends. It was a pretty simple game but challenging enough to make it fun for people of all ages. Especially with the wireless steering wheel that came with the Nintendo Wii reboot.

Halo: Combat Evolved, the original game, has spawned multiple movies, action figures, television shows, and spin offs. It set the bar high for all that was to come after. In case you haven’t played Halo, it’s set in the 26th century and as the player, you assume the role of the Master Chief, an enhanced supersoldier accompanied by Cortana, an artificial intelligence. In this military science fiction, you battle aliens as you progress towards the goal of uncovering the secrets of the Halo, a ring-shaped artificial world.

Pokémon is one of those rare video game franchises that children and adults can agree is pretty amazing; I mean, clearly there’s a reason it’s remained a worldwide sensation for over two decades. And how? Is it the clever tagline ‘Gotta catch ‘em all’? Is it the simple premise of becoming the best trainer that’s to credit for its commercial success after all these years since it debuted on Game Boy? Although all the subsequent releases since the original are a good choice, Pokémon Blue, Red, and Yellow are pretty highly ranked among the top even to this day.

Probably one of the best-selling but also most controversial action/adventure video games on the market, Grand Theft Auto is one we had to mention on this list. GTA has been called out by countless parents, special interest groups, and government officials for a change in content or a ban on the sale of the game in the market due to violent crimes, racial stereotypes, and sexual content. You, the player, assume the role of a criminal who goes through a wide variety of missions involving violent crimes including auto theft, robbery, extortion, and murder.

This one’s a classic, so much so that even those who weren’t particularly interested in video games as children probably played it at least once. Sonic the Hedgehog was released by Sega in 1991 and has since had countless sequels, spin-offs, and now even a movie which, due to the inaccuracy and overall terrifyingness of the adorable main character, is being completely remade and will be released in 2020. It’s a pretty simple game, or at least the first few releases were, but because of its fast-paced nature and the frustration of so easily losing the rings you worked so hard to collect, it was truly addicting.