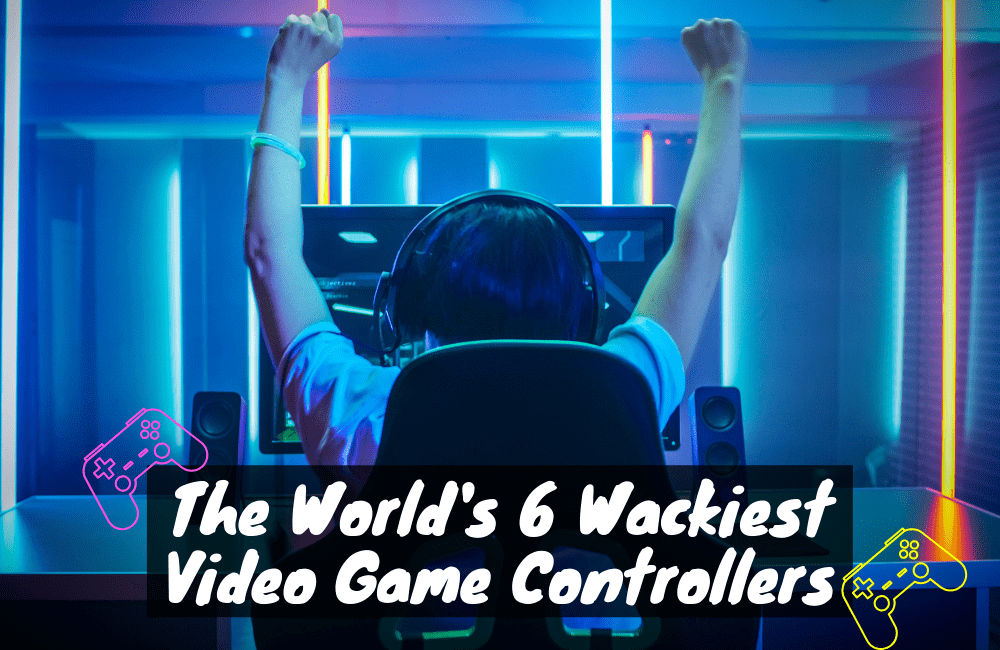 These days most video game controllers are made with ergonomics and utility in mind, but that wasn’t always the case. Take a look into the past and you’ll find that console and computer controllers have been subject to some strange, some over-the-top, and some just plain dysfunctional updates. But they certainly are worth noting and that’s why today we’re going to take a look at the 6 weirdest video game controllers.

One of the newest you’ll see on this list, the Miller Lite Cantroller was released earlier this year and yes, it is filled with the company’s classic “fine Pilsner beer” straight from Milwaukee, Wisconsin. As you can see, the game controls are on the side of the can with a pretty simple design: a direction pad, Start and Select buttons that are all flush to the can and push inwards plus four face buttons that are slightly raised. The battery pack and Bluetooth transmitter can be found on the bottom of the can. The controller can be refrigerated which is good considering most of us don’t love the whole room temperature beer thing but we’re not sure that we’d recommend chugging its contents. What happens when you can’t rinse the can of its stale beer smell because you could electrocute the battery pack – and yourself?

Samba de Amigo is all about rhythm and was released by Sega in 2000. The premise of the game is to use the maraca-shaped controllers to match on-screen patterns tuned to popular Latin music. You’ve gotta shake the maracas at high, medium, and low heights to the beat of the music then strike a pose with the maracas perfectly positioned when it prompts you.

Sounds all fun and dandy but games with controllers that serve only one game and one purpose generally don’t do as well on the market. Once you’re tired of this game, you pack up the controllers and don’t take them back out till you want to play it again.

The Fire Dragon USB Controller has to be one of the freakiest video game controllers ever produced – or the coolest…whichever way you want to look at it. This “ergonomically designed” (which in this case seems to mean that the protruding scales and body parts seem to ease the discomfort?) game controller is compatible with Windows Vista, XP, 2000, ME, and 98 making it far more versatile and useful than the previous one.

This is quite an interesting and bulky contraption. Even though it kind of resembles a gun with a dog cone of shame, it’s actually a pretty cool device! Behold the Novint Falcon meant to replace the mouse of the PC gamer as it provides force feedback and allows you to feel every bit of the action. Lift a gun and you’ll feel the applicable amount of weight added to your hand. Shoot a weapon and it takes on a life of its own: whether a pistol or a machine gun, it’ll apply the force of your chosen tool.

The pistol grip was actually the second release of the Novint Falcon which originally had a small, multi-buttoned round knob instead of a pistol and can still be purchased online for the low low price of $500.

If you love a good train or ship simulation, you haven’t proved it till you own one of these $200 beasts. Complete with 34 programmable buttons (not sure if there are even 34 options for train or ship operation but hey, you can get creative) this PC controller will all but transform your space into a whole new world.

Let’s be honest: Nuby Tech hit it out of the park with the design of this video game controller; it really does look like a chainsaw plus it’s complete with a two-grip handle system that mimics the way you might hold a real chainsaw if, let’s say, you were being attacked by walking dead. Each chainsaw has its own unique bloodstain pattern making no two controllers the same. It also comes with a display stand that you can use to hold the device in place.

Now, there are a few drawbacks when it comes to a design that prioritizes form over function. The device has all your typical GameCube buttons but lacks the intuitive configuration as it requires you to shift your hand placement in order to access the buttons.