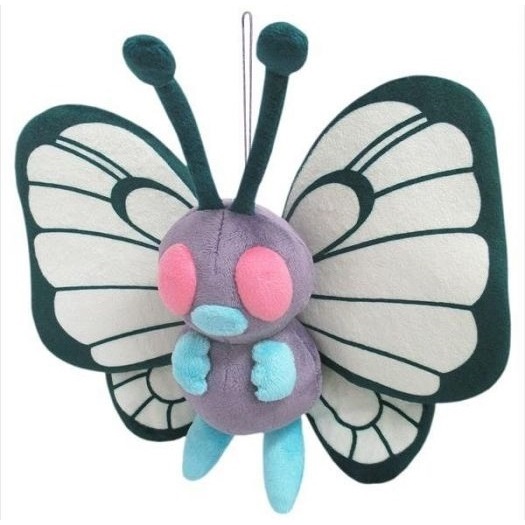 San-ei’s Pokémon All Star Collection plush series features a beautifully detailed version of Butterfree! Some of the highest quality Pokémon plush on the market come from this lineup. Every plush is constructed out of super soft ‘minky’ fabric and weighted with beans to help them sit/pose.

Butterfree resembles a vaguely anthropomorphic butterfly with a purple body. Unlike true insects, it only has two body segments and four light blue legs. The upper pair of legs resemble small, three-fingered hands, while the lower pair resembles long, digit-less feet. Butterfree has two black antennae, a light blue snout with two fangs underneath, and large, red compound eyes. Its two pairs of wings are white with black venation. Two oval scales on a female Butterfree’s lower wings are black, but they are white on a male.

The wings of Butterfree are coated with poisonous scales that easily fall off continuously as it flies. If inhaled, it results in several status conditions. It will defend Caterpie from bird Pokémon using this powder. This powder also repels water, enabling it to gather honey even in the rain. Butterfree can use its sensitive antenna to detect the odors of blooming flowers six miles (ten kilometers) from its nest in search of nectar, which it carries with the hairs of its legs. Sometimes, it has territorial disputes with Cutiefly over fields of flowers. It also consumes sap from trees pierced by Heracross, as seen in the anime. Butterfree is found in temperate forests and jungles, but it has also been observed flying near the ocean as part of its migratory breeding pattern.