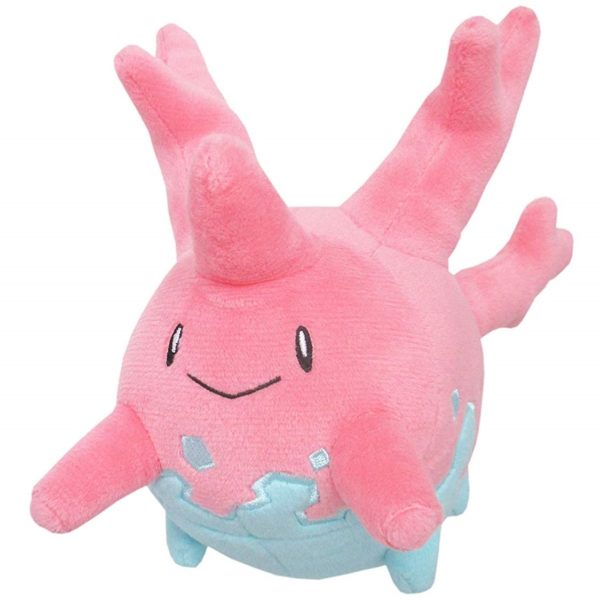 San-ei’s Pokémon All Star Collection plush series features a beautifully detailed version of Corsola! Some of the highest quality Pokémon plush on the market come from this lineup. Every plush is constructed out of super soft ‘minky’ fabric and weighted with beans to help them sit/pose.

Corsola is a small, pink, roundish Pokémon with branch-like growths on its back, which are similar to coral. There is a smaller, blunt horn on its forehead, and it has black, oval eyes. It has a white underside, which speckles towards the sides. Its four legs and two arms are blunt and stubby.

Found in the warm shallow waters of southern seas, Corsola requires clean water to live. If its habitat is dirty, the growths on its back become discolored and degenerate. However, when it is healthy, its growths regularly shed and grow back. It is able to regrow them over the course of a single night. It forms large social groups. Occasionally, these groups get so large that people may live atop them, as is the case in Pacifidlog Town. Corsola’s horn is a prized material, commonly used for jewelry and carving, as seen in the anime. Smaller Pokémon like Seadra and Luvdisc are sometimes sheltered by Corsola’s branches, and even offer it protection from foes.