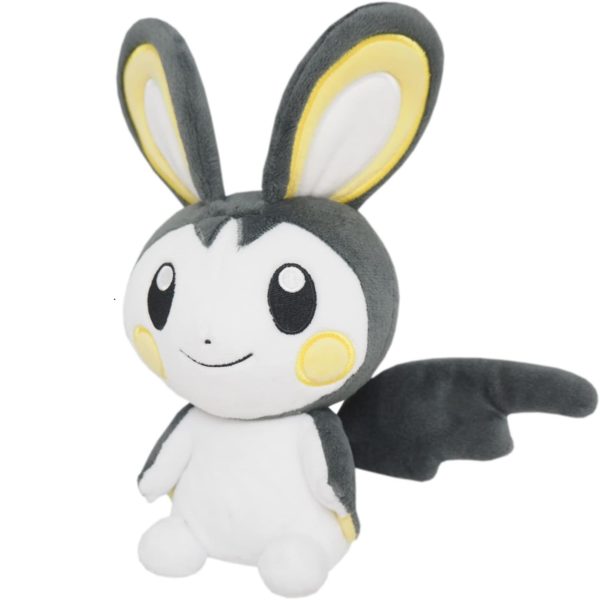 San-ei’s Pokémon All Star Collection plush series features a beautifully detailed version of Emolga! Some of the highest quality Pokémon plush on the market come from this lineup. Every plush is constructed out of super soft ‘minky’ fabric and weighted with beans to help them sit/pose.

Emolga is a white, rodent-like Pokémon resembling a flying squirrel. It has black eyes, a tiny nose, and yellow cheek patches. It can create electricity on the electric sacs located on its cheeks and store electricity inside its membranes. Its ears, positioned at the top of its head, are rounded in shape and black in coloration, with yellow and white sections of coloration in the inside of its ears. It sports a vaguely hood-like patterning of black around its head, with a spiky extension of the pattern above its face. It has yellow winglike flaps connected to its three-fingered arms. Its feet are white and fairly small and its black tail is in a jagged shape.

Emolga lives in treetops, sometimes in holes gouged by Pikipek, and uses its flaps to glide from tree to tree. It generates electricity in its cheeks, stores it in its membrane, and discharges it while gliding. It does this in order to be able to scare off bird Pokémon, giving Emolga the capability to gather lots of food. It then grills its food, being berries or bug Pokémon, with electric shocks to eat. However, due to its tendency to stuffing its cheeks with food, Emolga will not be able to fly properly. While Emolga is cute, it tends to cause trouble.