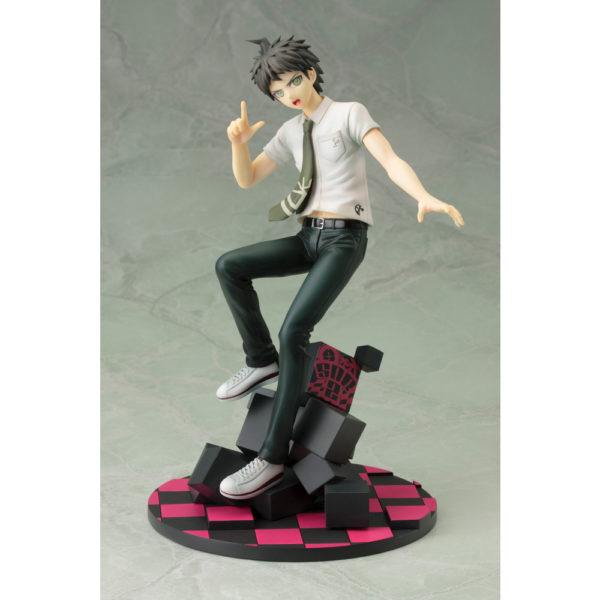 Characters from the popular high-speed mystery action game, “Super Danganronpa 2: Sayonara Zetsubou Gakuen,” are joining the ARTFX J series! The first in the lineup is the protagonist of the game with the title of “Ultimate ???”: Hajime Hinata! The figure perfectly captures the distinctive image and design of the game, while still depicting the looks and body that resemble that of a standard high schooler. The hint of skin peeking out from underneath his school uniform also adds an extra charm to the figure!

The fine sculpting of the hair as well as the distinctive antenna (?) on the top of his head is also recreated! While the outfit and pose look fairly simple, this figure brings to life every element of this statue; from the details in the tie to the small decorations on the shirt.The base is decorated in pink and dark gray with a series of cubes sticking out. A logo inspired by the game’s title is printed onto one of the cubes and adds a stylish finish reminiscent of the game itself. Line this figure up with ARTFX J Nagito Komaeda to immerse yourself in the world of “Super Danganronpa 2: Sayonara Zetsubou Gakuen.”

To commemorate the 10th anniversary of the Danganronpa series, this reproduction variant comes with a special packaging that is decorated with the “Danganronpa 10th Anniversary” logo.