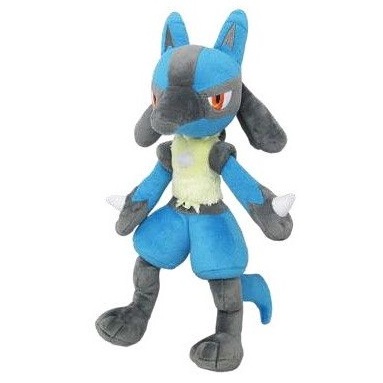 San-ei’s Pokémon All Star Collection plush series features a beautifully detailed version of Lucario! Some of the highest quality Pokémon plush on the market come from this lineup. Every plush is constructed out of super soft ‘minky’ fabric and weighted with beans to help them sit/pose.

Lucario is a bipedal, canine-like Pokémon, with fur that is predominantly blue and black. It possesses a short, round spike on the back of each forepaw, in addition to a third on its chest. It has a long snout and ears. When its mouth is open, it has two pairs of pointed teeth, one in the upper jaw and one in the lower. It possesses cream-colored fur on its torso, and blue fur on its thighs that resembles shorts. It has a medium length tail of the same blue color as well. It stands on its toes rather than on its entire foot. It has developed four small black appendages on its head, which rise when Lucario reads or manipulates aura, a special energy that it senses.