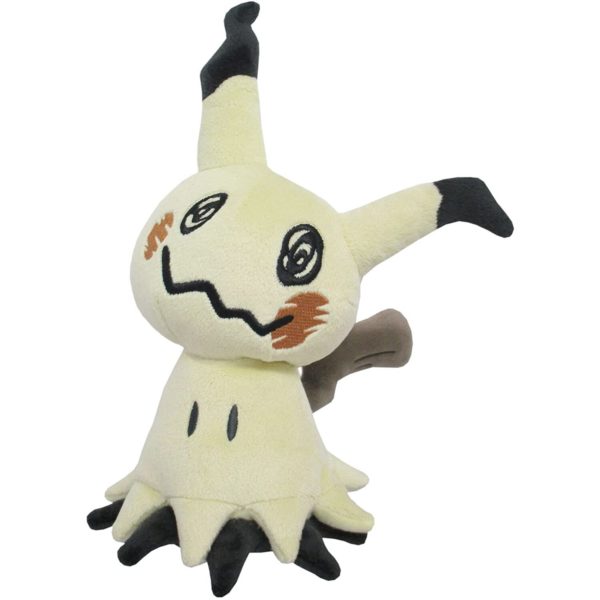 San-ei’s Pokémon All Star Collection plush series features a beautifully detailed version of Mimikyu! Some of the highest quality Pokémon plush on the market come from this lineup. Every plush is constructed out of super soft ‘minky’ fabric and weighted with beans to help them sit/pose.

Mimikyu is a small Pokémon whose body is almost entirely hidden under an old rag. Its small size makes it the shortest Ghost-type. Its beady black eyes are visible through holes in the body of its disguise, and the fringe of an amorphous foot or lower body is visible under the hem. Occasionally, it will also extend a black appendage from under its rag. The veil itself resembles a Pikachu. The cloth is yellow with black tipped ears. The Pikachu face appears to be drawn with crayons, consisting of black eyes, red cheeks, and a squiggly black mouth. The head is hollow and can be used to store objects. Mimikyu also carries a small stick resembling a lightning bolt to create a tail for its costume. When its disguise is damaged, the costume’s head droops limply backwards, revealing Mimikyu’s ruse. Larger rips in the costume are accompanied by shadowy vapors pouring out from whatever is hidden within.

A lonely Pokémon, Mimikyu is always covered by its disguise. Since this Pokémon is weakened by sunlight, it is rumored that the veil is used for protection. It is believed that seeing its true form will cause a mysterious illness or even a painful death. Mimikyu’s disguise is modeled after Pikachu because of the popularity of Pikachu-styled merchandise, thinking that its disguise would allow it to make friends with people.[1]Unfortunately, this attempt makes it disguise look more creepy. If its rag is damaged or its neck is broken, it will spend all night patching it in front of a mirror. It then seeks revenge on the one that damaged it, fearing that its true identity could have been exposed. Unforgiving, Mimikyu will take down the culprit to the point of costing its life in the process. Mimikyu finds repairing its neck difficult, often causing it to cry.