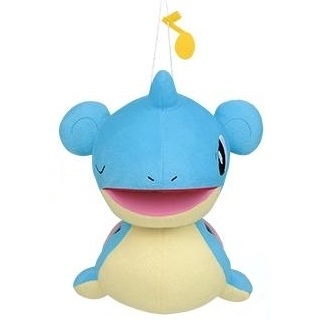 A singing Lapras gets an adorable new addition to the popular Korotto Manmaru plush lineup by Banpresto!

Lapras is a large sea Pokémon that resembles a plesiosaur. It has a blue hide with darker blue spots and a cream-colored underside. It has large brown eyes, a short horn on its forehead, and tightly curled ears. It has a long neck and four flippers. The foremost flippers are larger than the hind. On its back is a heavy, gray shell covered in blunt knobs. Lapras is a gentle, helpful Pokémon that enjoys ferrying people across bodies of water. In the past, its docility made it an easy target for hunters, and it was driven to near-extinction. Recent protection efforts have seen Lapras become overabundant instead, which is now affecting the fish Pokémon numbers in some areas. An intelligent Pokémon, it is able to understand human speech. Lapras have been known to travel in large pods across the seas, spanning both polar and tropical areas. To keep in touch with other of its kind, it sings enchanting melodies. In the anime it was shown that Lapras is able to develop psychic abilities such as telepathy.