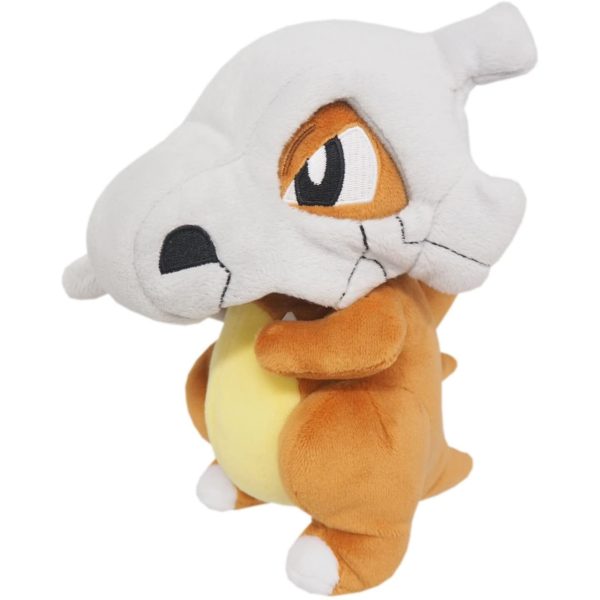 San-ei’s Pokémon All Star Collection plush series features a beautifully detailed version of Cubone! Some of the highest quality Pokémon plush on the market come from this lineup. Every plush is constructed out of super soft ‘minky’ fabric and weighted with beans to help them sit/pose.

Cubone is a small, bipedal, dinosaur-like Pokémon with a light brown hide that covers most of its body, except for its cream-colored belly. Two small claws, one on each hand, serve as its thumbs, and one large nail on each foot make up its toes. It has two small spikes on its back and a short tail. On its head, Cubone wears the skull of its dead mother as a helmet. Because of this, much of its actual face has never been seen, except for its triangular, black eyes and a small area surrounding them. The skull has two rounded horns on the top of its head and a tooth-like point on the lower sides. Under the skull, Cubone has a brown snout. The small Cubone survives only through the immense skill it possesses in wielding the bone it carries as a weapon. The bone allows it to learn Bone Club and Bonemerang, two moves exclusive to Cubone and its evolution Marowak. It and its evolution are also the only Pokémon capable of using the Thick Club item. It is called the Lonely Pokémon because of its tendency to keep to itself and avoid social situations, due to the trauma caused by the death of its mother. Cubone will often weep at night in mourning of its mother.