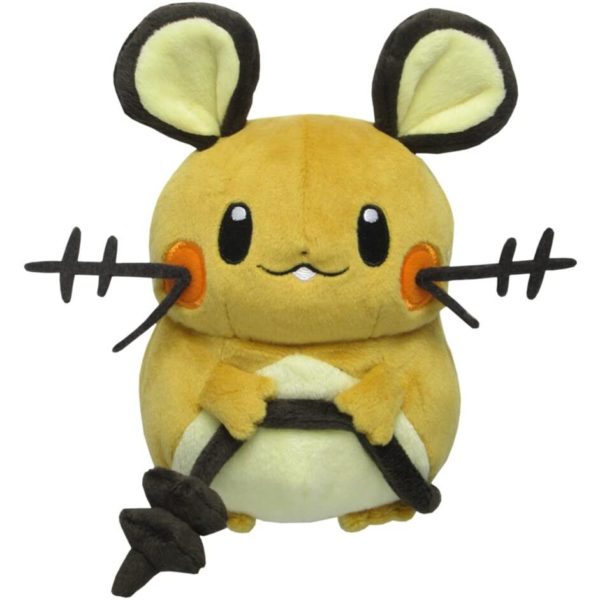 San-ei’s Pokémon All Star Collection plush series features a beautifully detailed version of Dedenne! Some of the highest quality Pokémon plush on the market come from this lineup. Every plush is constructed out of super soft ‘minky’ fabric and weighted with beans to help them sit/pose.

Dedenne is a bipedal, orange mouse-like Pokémon with a round body. It has round, black ears with pale yellow interiors, black eyes, a tiny nose, and a prominent upper incisor with a slight point. On each cheek is a circular, dark orange marking with two black whiskers. The upper whiskers have branches and resemble antennae, while the lower whiskers are simple. There is a thick black stripe down is back and it has a pale yellow belly. It has stubby limbs with three digits on each paw and a long, thin black tail with a tuft of fur on the tip.

Dedenne’s upper whiskers serve as antennae that can send and receive electrical waves. This allows it to communicate with others of its kind over great distances, sharing locations of food or electricity, and sense its surroundings. The simple, lower whiskers are organs that can fire electricity. However it is unable to generate a lot electricity on its own. It absorbs electricity from buildings by plugging its tail into outlets. It also absorbs electricity from other electric Pokémon. This results in the home of the residence it absorbs from getting high electric bills.