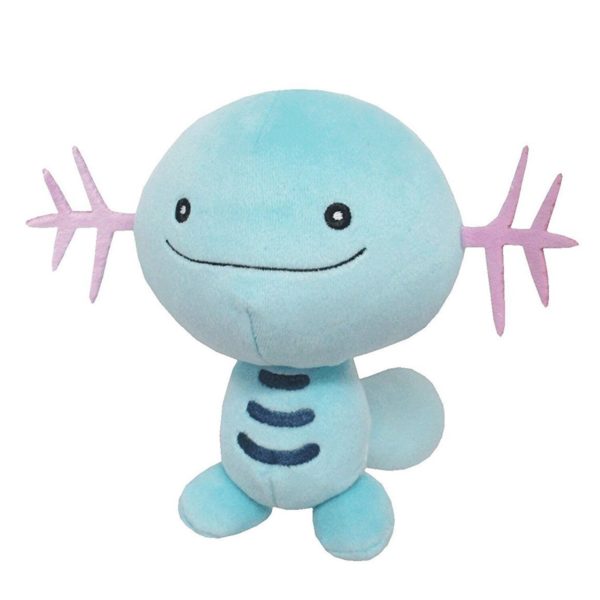 San-ei’s Pokémon All Star Collection plush series features a beautifully detailed version of Wooper! Some of the highest quality Pokémon plush on the market come from this lineup. Every plush is constructed out of super soft ‘minky’ fabric and weighted with beans to help them sit/pose.

Wooper is a mostly blue, amphibious Pokémon that resembles an upright, armless axolotl. Wooper’s head is large compared to its body, and it has small, round, black eyes. It has purple, branching gills on either side of its head; the males have more branches in its gills than the females. Wooper stands on two small, round feet, and it has a large, thick tail. On its belly are dark blue curved markings. It is implied in the anime that Wooper is a dull-witted Pokémon oblivious to its surroundings. Wooper lives in cold water most of the time. When sleeping, it partially buries itself in the mud at the bottom. It will occasionally leave the water when the air cools in the evening to search for food along the shore. While walking on land, it coats its body with a slimy, toxic film that keeps its skin from dehydrating and insulates against the cold. The film causes a shooting pain if touched barehanded.