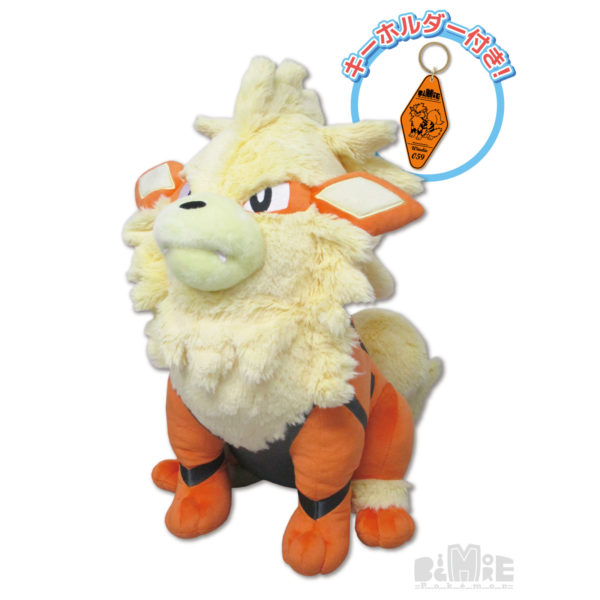 San-ei’s Pokémon BigMore! series features a huge and beautifully detailed version of Arcanine! This premium series offers your favorite Pokémon in a big size while still maintaining strict attention to quality to give the real-life feeling of your chosen partner. Own just one and it’ll make you wanna catch ’em all! Each BigMore! plush includes a matching acrylic keychain.

Arcanine is a quadruped, canine Pokémon with an orange pelt marked by jagged black stripes. It has diamond-shaped ears with beige insides, black eyes, a round, black nose, and two pointed teeth protruding from its upper jaw. Its head, muzzle, and chest are covered in shaggy, beige fur, except for two oval sections around each eye and ear. Long tufts of fur grow behind its elbows and around its ankles. Its underside is black, and it has a billowing, beige tail that is bent in the middle. Each paw has three toes and a round, pink pad.

Arcanine is a fiercely brave and loyal Pokémon. It is capable of running 6,200 miles (10,000 kilometers) in 24 hours with a speed and grace reminiscent of flight. Additionally, the move Extreme Speed was its signature move in the past. Arcanine has long been admired for its beauty and speed, and anyone who hears its bark will grovel before it. The source of its power is a flame blazing wildly inside its body. Being the result of an evolution via Evolution stone, Arcanine is rarely found in the wild, but when found, it is usually seen living in prairies, and Pokémon Snap has also shown it living in active volcanoes. In the anime, it was shown that it stashes food in its mane and carries it to its nest for its young.