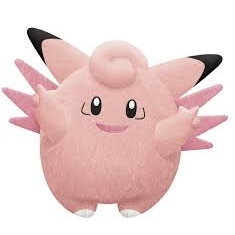 Clefable gets an adorable new addition to the popular Korotto Manmaru plush lineup by Banpresto!

Clefable is tall, pink Pokémon with a vaguely star-shaped body. It has long, pointed ears with dark brown tips and black, oval eyes with wrinkles on either side. A curled lock of fur hangs over its forehead, much like its long, tightly curled tail. On its back is a pair of dark pink wings; each wing has three points. Its hands have three fingers each, and its feet have two clawed toes and dark pink soles.

Clefable is a timid creature that flees when it senses people approaching and is one of the world’s rarest Pokémon. Its sensitive ears can distinctly hear a pin drop from half a mile (one kilometer) away. Because of its acute hearing, it prefers to live in quiet, mountainous areas of which it is protective. Using a bouncy gait, it is able to walk on water and sometimes appears to be flying using its small wings. The anime has shown that Clefable is actually an extraterrestrial Pokémon.