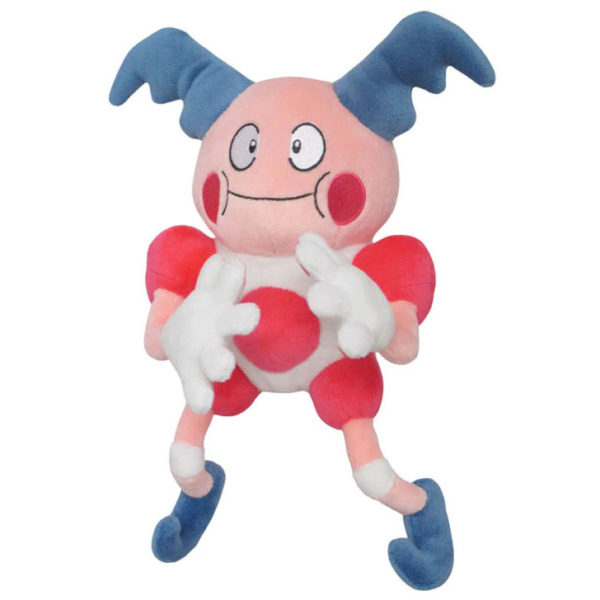 San-ei’s Pokémon All Star Collection plush series features a beautifully detailed version of Mr. Mime! Some of the highest quality Pokémon plush on the market come from this lineup. Every plush is constructed out of super soft ‘minky’ fabric and weighted with beans to help them sit/pose.

Mr. Mime is a bipedal, humanoid Pokémon. Blue growths resembling clown hair extend from the sides of its pale pink head, and there is a magenta circle on each cheek. Its jaw is curved inward, resembling the mouth of a wooden dummy. It has a round, white body with a magenta spot in the middle, light pink arms and legs that connect to its body via magenta spheres, and small white coverings over its knees. Its white hands resemble gloves with magenta pads on the tips of its white fingers and its dark blue feet curl upward at the tips. From birth, this Pokémon is an excellent pantomime. As it matures, it gains the ability to solidify air molecules by vibrating its fingertips. This ability allows it to create invisible objects with its gestures. It punishes those who interrupt its act or are not impressed by slapping them. Mr. Mime is usually very rare, but can be found in suburban areas. In the past, Substitute was its signature move.