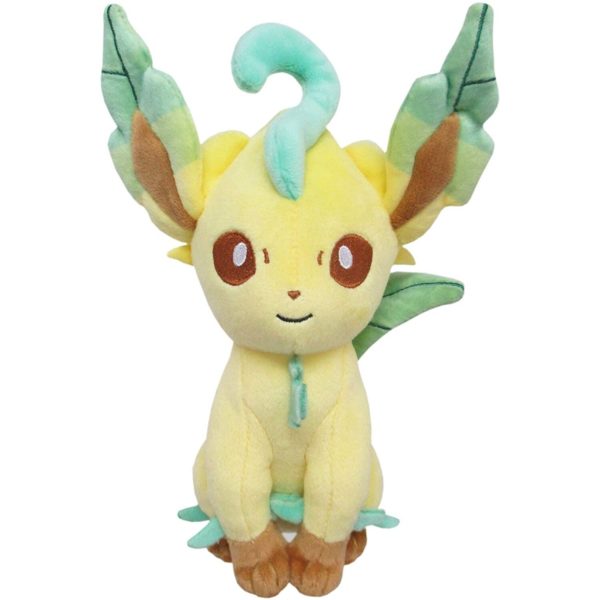 San-ei’s Pokémon All Star Collection plush series features a beautifully detailed version of Leafeon! Some of the highest quality Pokémon plush on the market come from this lineup. Every plush is constructed out of super soft ‘minky’ fabric and weighted with beans to help them sit/pose.

Leafeon is a mammalian, quadruped Pokémon. Its body is tan with dark brown paws. It has a multitude of small green sprouts growing all over its legs, chest and back, with the longest one on its head, in front of four tan tufts of fur. Leafeon’s ears and tail are stylized to resemble tattered leaves. It has brown eyes and a small, brown nose. This Pokémon’s cellular structure is similar to plants, which allows it to perform photosynthesis and purify the air around it by sleeping under the sunlight; it gets its energy in this way instead of eating. It is a pacifistic, quiet Pokémon, preferring not to fight, though sharpens its leafy tail for the occasions it needs to. Its aroma is similar to fresh grass in its youth; as it ages, this fragrance bears more of a resemblance to fallen leaves. The aroma is favored in Galar, where it is used to create a popular perfume.